Fronted by the husband and wife team of Steve Iorio and Renate Ludwig, the Vagrants are one furious rock and roll machine who delivers an intensely energetic live show that leaves any competition eating dust.

Formed in the early years of the new millennium, the Vagrants are without parallel for their conviction, entertainment value and work ethic. In the past 6 years the band has released 4 CD`s and toured their backsides off both nationally and internationally.

The Vagrants are a must see for anyone who likes their live music experiences hot, sweaty and shout it out loud. In Renate Ludwig the Vagrants possess a firebrand of a front-woman who`s stagecraft is mind blowing in its physicality.

If you read German check out this live review from our tour this year….  check out the crazy eyes! 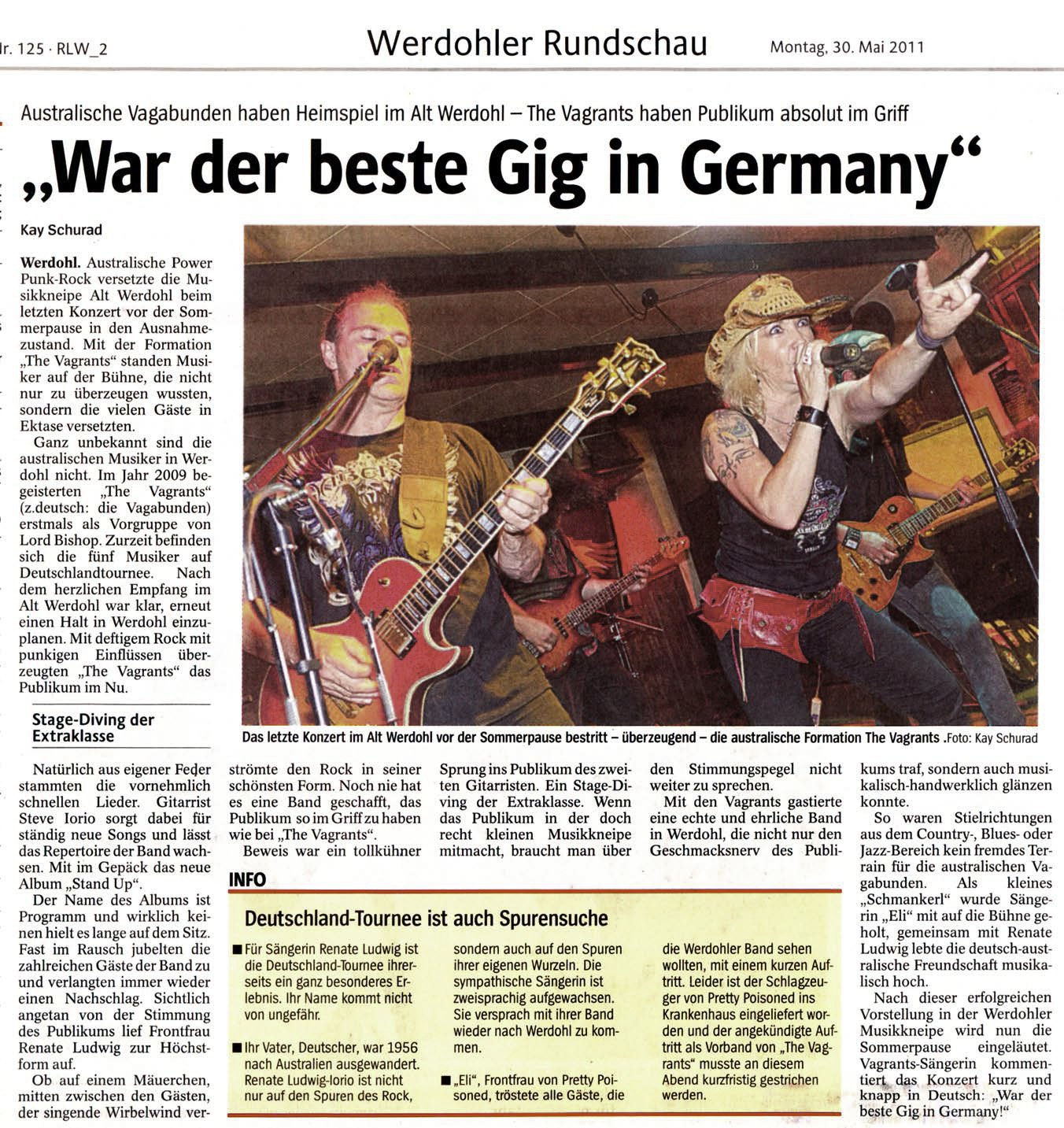 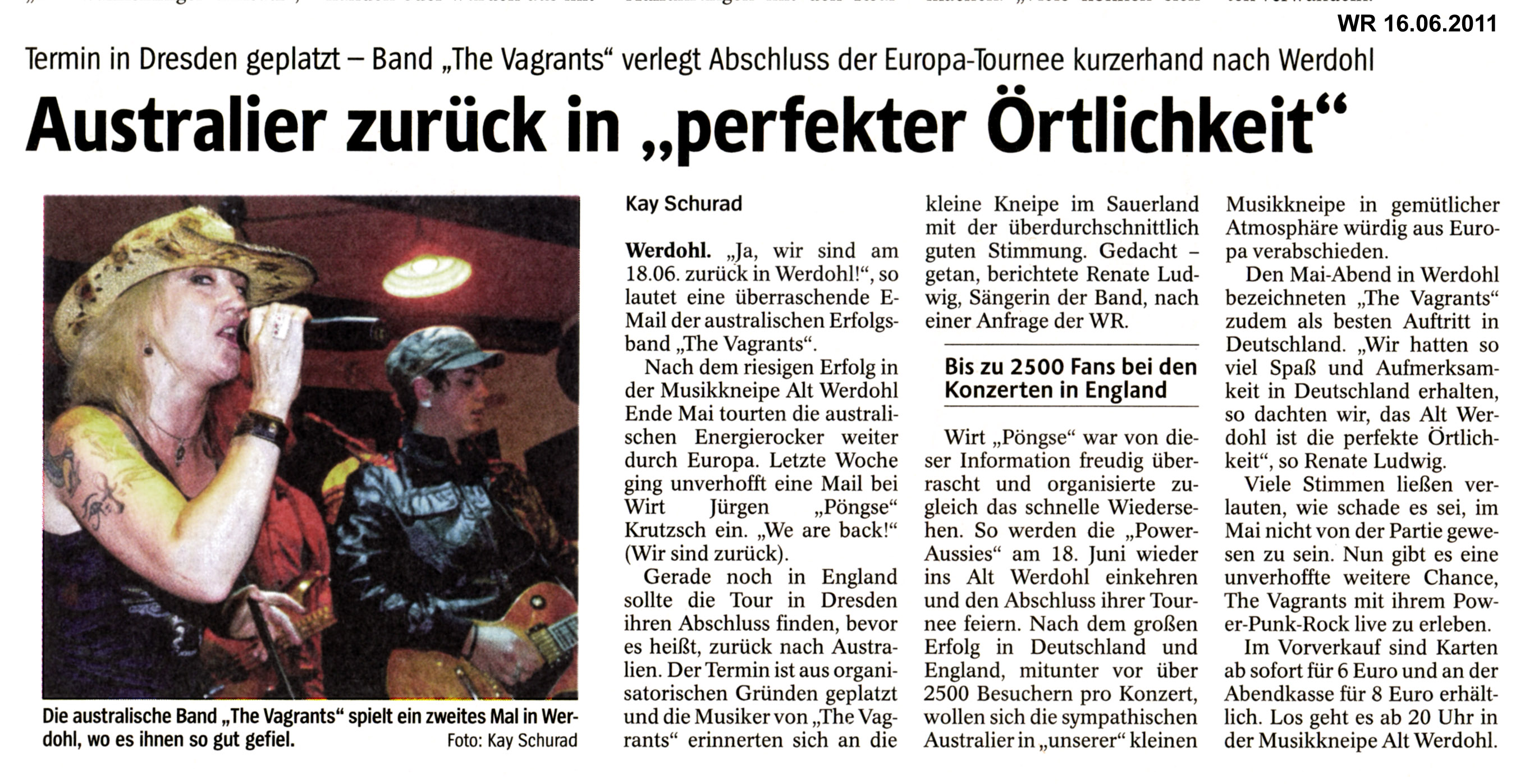 Out of Melbourne comes a band The Vagrants. They are very active concert act, and during the previous years they have played in many places around domestic therithory and abroad. Till now, they have released a 2 EP’s and 2 full-lengths. “Be True” is a newer one, and last few months band did a lotta’ promotional activities to introduce its work to wider audience. As a band, The Vagrants are faithfull I would say equally to power pop tendencies and rock options. An interesting and convinceble rola in its approach belongs to female fronted singer Renate Ludwig, and her method of vocalizations posses evident energy as same as emotional statements. In some aspects, musically The Vagrants knows to reminds on classic rock acts from the 70’s and 80’s, and in the other side on power pop groups, comes out from the post new wave era period.Its offering materials posses similiar valuabilities, without weacker places, but also without some tipical hittish tunes. One general pleasent atmosphere, as same as vibrations has offered Aussie band, and “Be True” even of planty of positive moments, as a album is mostly nearer to 80’s psychology than to nowadays options. Rating : 7,5/10 C / o :www.thevagrants.com.au

The Vagrants love to hit the road & if you want a full on music trip this is the Band to give it to you.

Their music is pedal to the metal, hard, hot & steamy. Renate’s voice tells you this is a girl not to mess with & the boys back her all the way. Vocals & instruments are done so that you know they mean business & also know their business. Music at its best. The Vagrants can only keep on going, onwards & upwards to the very top. Best wishes to all of you.

I play them on my show Spirit of the Blues & love them.

Wendy Rudin- Spirit of the Blues

Wow, look at you ambitious hooligans.
its good to see you getting dates and rocking the globe. you kickass so I’m sure you’ll do great wherever you go.
see you next year!!!

When the first track “Let’s Party” opened on this album, I thought I was listening to something from the early years of rock and roll with Janis Joplin and the likes of Big Brother and the Holding Company. The Members of the band are influenced by a wide array of musical genres and that is certainly heard in their sound. They have a laid back vibe with bite and some fancy guitar work along with an exceptionally rhythm section. This album is so coloured that each song is different; some sound a little country in parts, and then change to a roaring blues sound, others are rock. I love Renate’s’ voice in the song “You’re Gone” which is a moody blues rock number reminding me of my all time favourite singer Janis Joplin. “S-Cat” has a more rock-country vibe, twang n’ all, showing how varied her voice can be. And this is the way the album carries on’ it’s got a bit of everything!

Australia has a habit of producing fantastic local bands, and then neglecting them. This was the case of The Vagrants. Thankfully their name is true to their nature or we wouldn’t have the raw, warts and all power of their independent self titled first recording. Perhaps thanks to these nomadic tendencies The Vagrants are a unique sound in today’s aural landscape of local bands. Their choice of instruments gives them a point of difference to most bands, including the occasional saxophone, flute or harp. By far the greatest twist at their disposal has to be Renate Ludwig. In the tradition of Fiona Apple, Alanis, and Susie Di Marchi, the power of the vocal resonating out the littlest person in the room is unfathomable.

It was cold, it was wet, and it was St Kilda. Basically, the perfect setting for getting down and dirty with one of the greatest experiences that happens to haunt ol Melbourne town. Indeed, late afternoon on the day that Eurovision would later be taken out by a bunch of Nordic wankers who’d broken into Gwar’s trailed backstage at a gig in Helsinki years back, there were people out to see the jazz tinged blues rock of The Vagrants in the superbly decadent front bar of The Greyhound.

Renate (the singer) prowled, scowled the way into the grizzled punters hears, as formerly hirsute guitarist Steve Iorio tore the Greyhound apart like the re-incarnation of boogie Jesus, but way better at the blues.

The beers went down, the tunes went down, and the punters got down. They dropped the rockabilly jazz rock explosion of “That’s what life is like”, the groove ridden highway RAWK of “Accelerated Kharma”, and disgustingly funky folk blues rendition of “Wrong side of the Tracks”

They boogied their way into “Let’s Party” and subsequently, the party continued. The overlap of white boy funk meets restrained and upbeat rootsy bluesy folk meant that no matter who was there, be they old, you, young, sexy or homely, it was a joyous crowd. You’d actually be hard pushed to find a crowd as happy and as buoyant down in St Kilda on a cold wet Sunday Afternoon.

But then, that’s the nature of The Vagrants. Their groove gets under your skin; the riffs make your toes go at angles away from your knees. It’s like getting pissed on the mandibles of funk and expounding all that’s fun in life. Melbourne should be proud.