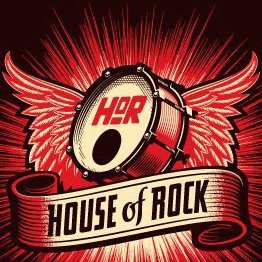 Just a reminder kids that we are supporting the groovy cats known as Deer Stalker this Saturday night 18th August at Melbourne’s wicked rock venue. House Of Rock. (aka.  Inflation)

Steve and I are also celebrating our wedding anniversary that night so we couldn’t pass up a chance to play at the venue where we met 20 years ago. …. I better go and check to see if I still have that old medallion to get in for free and get cheap drinks!! So it will be night of crazy rock and we want to see you all come and dressed up in something wonderfully tacky from the 80’s and 90’s

Thrust Magazine (M. Alberto Rivera) The best Australian rock bands have always kept their music loud, straightforward and intense as an out of control brush fire. The Vagrants are no exception.This Thunderous five piece band from Down Under is set on reminding you with each and every song just how powerful and life changing hgh charged, fist pumping rock and roll can be. Vocalist Renate Ludwig and guitarist Steve Iorio form the band’s def con one , two-pronged attack.Balancing showmanship and stellar song writing, Iorio pens the sort of songs you can sing along with by the time you get to the second chorus. “Amsterdamn’d”, “Accelerated Kharma”, and Dirty Little Secrets” are all instant classics. Slithering riffs combined with over sized and commanding vocals are from and centre withing each and every performance. Ludwig shows off her exceptional abilities on “Time Costs Nothing” as she overwhelms the listener with a haunting delivery as sure and unwavering as nails in a coffin. The rest of the band Geoff Browning, Andy Gardner, and Ben Harrington lay down the uncompromising rhythm whether is a slab of solid rock one moment or a shimmy with a resplendent boogie the next. The band has released 3 full length independent CD’s to date: Stand Up (2011), Be True (2009), a and Kharma (2006) and an EP of 6 songs before that. This band proves they are in ait for the long haul. They’ve done a remarkable job of capturing the group’s energy in the studio. The Vagrants provide the perfect soundtrack to a bar fight, back-seat tumble and or annoying the neighbours you can’t stand. They never let up, slow down or even consider being anything but completely bad-ass. Up until five minutes ago this was Australia’s best-kept secret. Now you’ve lost your excuse for not indulging in this example of audio excess.