The long and winding Road

Well as most of you know we are back in Melbourne after a fantastic tour.

The update on this site I am sorry to say have not been so frequent but I am sure you have all mostly followed our ramblings on facebook.  So this is a bit of an epic one..

Everyone keeps asking what was our favorite place, favorite gig, favorite beer, favorite food etc…. that is not such an easy thing to answer as we all have different feeling about our experiences.  I think I am safe to say that none of us have 1 favorite of anything. There were sooooo many good things about it all.

The thing that stick in all of our minds is the gig at Munster Stadt Fest ( Munster City Fest ).  A lot of towns in Germany have city fests in the springtime and we were lucky enough to have been invited to play one .. cheers for that one Phillip!!.. Our time slot was around 8pm and we got there to see some cool bands playing to passers by. We had a wander around the town to see some of the other stages, grab some food and enjoy the sunny day ( and evening ).  When we started a few people were hanging around to see this band from Australia and as we played more and more people were just stopping in the street drinking their beers and getting into the music. In the end we had over 2500 people lined down the street getting down and dirty with us so needless to say some stage diving was to be done.  That surprised the organisers as apparently no one has done that at this particular festival.  After about 75mins we stopped and hung out with some great people and went to one of our favourite bars where we had played a few weeks earlier the Gorilla Bar.  A Vagrant institution after 5 years of touring.

Another couple of place we played that stood out were the ‘Village’ in Habach, southern Germany and ‘Alt Werdohl’ in the north.  The Village was built around 1060 and is owned by Dieter who is a music fantatic and a damn good player himself.  We were there a night early and participated in a really cool Jam session with a lot of the local musicians and had a great night soaking up the atmosphere before our show the following day. At ‘Alt Werdohl’ we ended up having 2 shows  which was fantastic.  We had such a great gig there early in the tour which resulted in some amazing reviews so we asked if we could have our final show in Germany at this place. Brilliant bar, brilliant owners, brilliant punters.  All but sold out for our second gig and we had some American guys we met in berlin drive up from the South to see us also.. you guys ROCK!!

Speaking of ROCKING our good friends Phantom and Melanie came to Hamburg to see us from Austria and helped sponsor us to get over to England.  Without you guys we could not of done it!! These 2 superstars also came to Amsterdam to hang with us for our last gig of the tour.  LOVE IT!  And we all miss your goofy smiling faces.

A first for the Vagrants tour schedule this year was England. Meeting up with some of Steve’s and my old friends in London was fantastic.  It has been 10 years since we saw them and to do it on Steve’s birthday was even more fun! Not to mention we were all put up at friends houses and the boys were well and truly looked after by Richard and Diccon. Our 4 shows in England were a blast and a special thanks to Paul Tierney for organising our gig at the very cool ‘Keystreet’ club in Clitheroe and to Paul Blackmore of SouthernFX for organising our interview on RockRadio, the gig in Manchester and London and accom.

There are as always so many people to thank and I am sure that the boys all have their own thanks to do but on behalf of the whole band.  THANK YOU to all of our friends who gave us a roof over our head, food in our bellies, being tour guides for the newbies of the band and showing such amazing generosity.  You are too many to mention and if I do I know I will forget someone .. Shit this is sounding like a bloody Oscar speech, and the tears start flowing 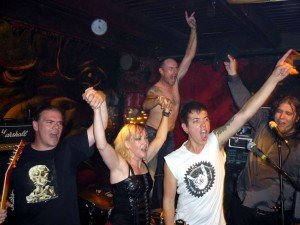 the next adventures are on the way

Our Australian tour is shaping up pretty nicely so for those of you in OZ get going and come and see a gig soon.. xx